Saturday afternoon the Ugress festival invited the people of Trondheim to a talk on Migrant Literature. The panel was moderated by Hanna Musiol, professor of transnational American and Anglophone literature and cultural studies at NTNU. With her in the panel she had Asieh Amini, Ashur Etwebi and Gulabuddin Sukhanwar. Amini is an Iranian poet, journalist, woman’s right activist and human rights activist. Etwebi is a Libyan poet and translator. Sukhanwar is a journalist, politician and writer from Afghanistan. Both Amini and Etwebi came to Trondheim under The International Cities of Refuge Network. This is an independent organization of cities and regions offering homes to writers and artists at risk. 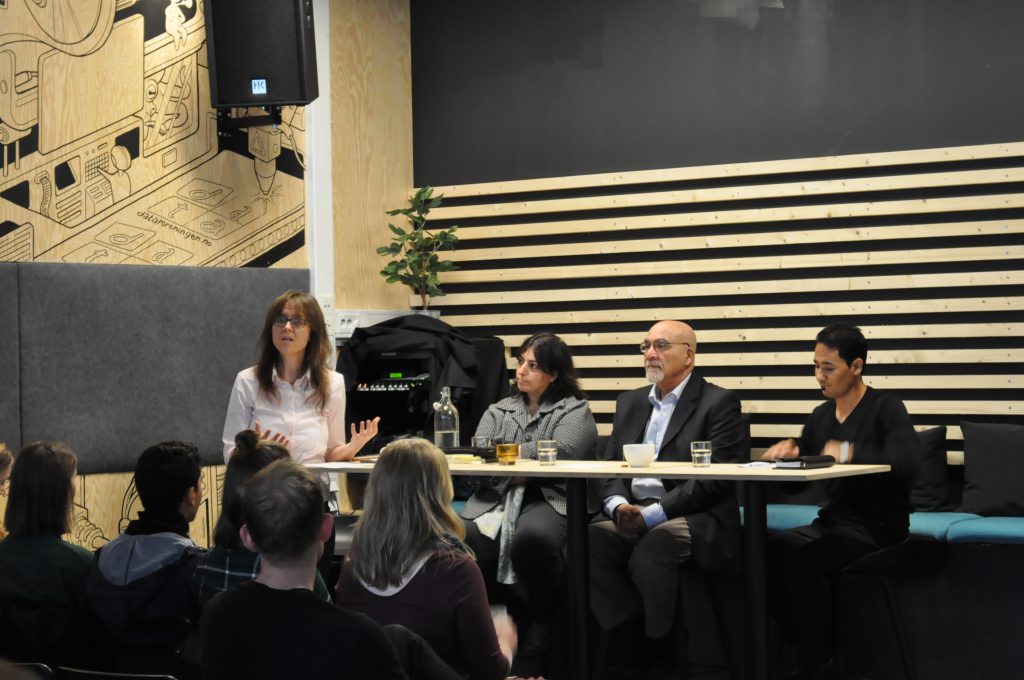 The refugee crisis and labels

The main focus of the talk was migrant literature as a theme, and as a form of expression, as a political statement but most importantly, as an art. Musiol gave a thorough introduction on what the idea of migration really means, and touching on the fact that we as a global society are currently facing the largest refugee crisis since the 2nd World War. With a spot-on analysis of literature at its best, Musiol continued with stating how ’Literature and poems can often be a political protest and authorities knows this’. She continued by explaining how literature is one of the best ways to cross the borders that can divide humans by race, gender, ethnicity and class. Each hurdle can be crossed by literature. She then digressed by saying how books on these topics are often labeled as either ‘document’ or ‘diaspora’ and how migrant literature is often mislabeled under these titles.

At this point in the talk, Amini gave us an insightful perspective by describing how ‘Immigrant literature is a middle part of the literature, in the middle of two boxes. And you can only ever bring into it your own experiences and the content of your earlier experiences. I describe it as two boxes, and I am standing in between.’  Etwebi reflected further on what makes an author place oneself under the category of migrant literature, musing that it could be literature concerning your peoples’ suffering. Sukhanwar brought the conversation over to the enabling nature of migrant literature.’It gives us the chance to write for different languages’, Sukhanwar said, and continued the conversation on the importance of being heard and understood.

Poetry with a social consciousness

Musiol asked the debaters the question ‘What inspired you and how is it to write poems in Trondheim?’ Amini answered that she would have preferred to introduce herself exclusively as a poet, but that it would not be right. ‘I was born a poet, not an activist but the situation in my society molded me into another human. I had to write about the human rights violations that I saw.’  She went on to describe how she was mainly seen as a journalist and a human rights activist in her former community, but that she had tried to merge both sides of her writing here in Norway.

On how to write yourself free

Etwebi went on to tell the audience a story, wanting to describe how liberating the process of composing poetry was for him. ‘Let me start with the positive; since December 2014, when I first came here, I have finished 4 collections of poems and 2 translations. How could I possibly manage to produce such amounts of literature? I wanted to write the feeling of being a refugee out of my system. What happened in Libya under the falsely labeled Arabian Spring was madness. I myself feel torn. So I experiment with new ways of writing poetry, with form and content.’ Sukhanwar followed up with telling us about how they do not have freedom of speech in Afghanistan. ‘We wrote in different languages and used pseudonyms to be able to write. Here in Trondheim I have found a new way to write.’

After the debate I was fortunate to be able to ask the panel my own question. When asked ‘Do you feel freer in your writing when you write from here in Trondheim?’ Amini answered ‘Yes, and no. No because you haven’t learned writing as a free people. Freedom is just a word. Even in Norway.’ She further elaborated ‘Maybe you think free, but are you writing free? Another way of writing is another way of censorship’. Sukhanwar closing statement‘My poetry is my heart, and my heart is free. But when I write articles I have limits. But my poetry is mostly about love and nature, so that can be free’ rounded of the talk on migrant literature leaving us with a fountain of new inspiration to discover.